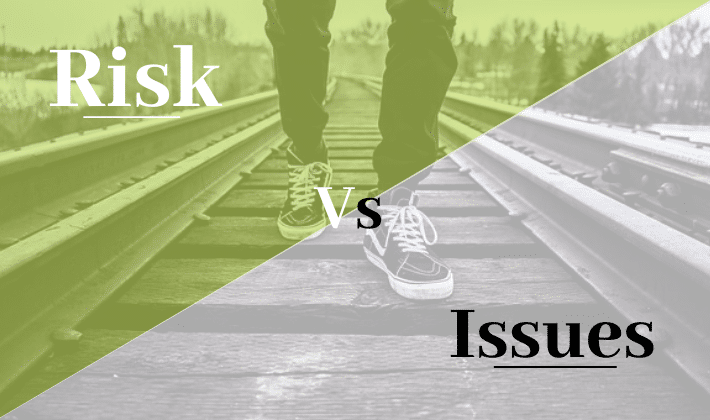 Most people think Risks and Issues in project management are same. They use these terms interchangeably. However, Project Risks are entirely different from Project Issues.

The main difference between project risks and issues is that risks are future events that may or may not happen whereas issues are events that have already happened.

You can look at Merriam Webster to understand English meaning of these terms.

A project risk an uncertain event or condition that, if it occurs, can impact the project objectives either positively or negatively.

Essentially it means that a risk may or may not happen but, if it happens, it can have a positive or negative effect on the project objectives.

Unlike the English meaning of risk, a project risk could be either negative or positive. The former is called a Threat and the latter is called an Opportunity.

The first two examples are Threats whereas the last one is an Opportunity.

A project issue is a current condition or situation that can impact project objectives.

Essentially it means that an issue has already happened and it can impact project objectives.

Unlike the project risk, an issue is always considered as negative. If a issue happens then it creates a problem.

Let’s translate the threat examples given above into issues.

Difference Between Project Risks and Issues

You can also read the following to gain more insight:

Praveen Malik is a certified Project Management Professional (PMP®) with 23 years of rich experience. He has the unique experience of managing large scale, complex, cross-functional projects across various geographies. He has unique distinction of working in a different type of business environments viz. software product development, software services, product-oriented software services, and software as a service. He maintains his own blog at https://www.pmbypm.com

How To Stabilize Your Business Using Project Management

Did You Know About The Top 10 Project Failure Reasons?

How To Deal With Changes In A Project?